Berlin Symphonica. There lies a defensive fortress built underground—the hope of the last of mankind. 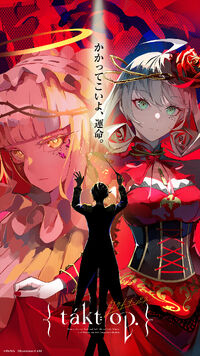 This place was built to enclose the secret to restore the world's harmony, which was brought forth by the Musicarts, girls that hold the power of the great classical scores.

But now, the enemy's attacks were violent, and humanity was about to meet an apocalyptic end.

The Symphonica, now a place where light cannot be seen. The conductor Takuto Asahina is still in his long slumber. As if waiting for an encounter with Fate...

That day, he and the girl finally met each other.

A game based on the takt op. concept was announced. The game, entitled takt op.: Fate Within the City of Crimson Melodies (takt op. 運命は真紅き旋律の街を takt op. Unmei wa Ma'akaki Senritsu no Machi wo), is a "symphonic RPG that leads the world towards harmony". The game has elements of turn-based combat and dialogue that uses Live2D.

The theme song of the game is "SYMPHONIA", which was written and composed by rionos and performed by Mika Nakashima.